What is this blog for?

Burleigh spends some time dealing with the sensitive subject of Pope Pius XII's conduct in relation to the Holocaust.  The debate over Pius' wartime role has developed considerably over recent years, and the state of the question seems to have moved beyond the rather extreme positions taken by some commentators in the past.  By contrast, Burleigh's endeavours to exculpate Pius have a slightly dated feel to them.  This is partly because the book was published in 2006, but (as Burleigh himself notes) the 'Pius wars' were already old news by then.  The controversy over Pius' wartime role has been running since at least the 1960s.  John Cornwell published Hitler's Pope in 1999, then retreated to a more agnostic position in The Pope in Winter in 2004.  Rabbi David Dalin's case for the defence, The Myth of Hitler's Pope, appeared in 2005, following The Pius War, an anthology published in 2004 by Dalin and a conservative journalist.

What Burleigh actually says about Pius is fairly plausible, if somewhat generous.  In the 1930s, the then Cardinal Pacelli made it clear to diplomats that he thought that Hitler was an evil fanatic, and he spent much of the decade issuing notes and memoranda protesting at the German government's violations of its concordat with the Vatican (Stalin, incidentally, had refused to sign a concordat, so no equivalent protests were made to Moscow).  When he assumed the papacy in 1939 and war broke out, Pius quickly began to issue condemnations of what was being done.  These condemnations were carefully worded, and he tended not to attack the Nazis head-on, but the evidence is that the Nazis themselves knew perfectly well what he was getting at.  Pius also acted as a go-between with the British for a plot by a group of German army officers to depose Hitler in a coup (the Chamberlain government dropped the ball on this), and he secretly leaked the date of the Germans' western offensive in May 1940.  After Hitler's invasion of the Soviet Union, his secretary of state helped overcome anticommunist objections in the United States by endorsing FDR's lend-lease agreement with Stalin. 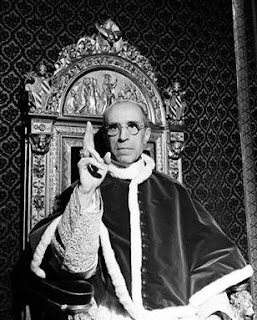 As pro-Nazi regimes took root in France, Slovakia and Croatia with support from far too many local Catholics, Pius kept his disapproval largely private.  His own justification for not being more outspoken in the face of Axis atrocities was that it would simply have made matters worse and put even more vulnerable people in harm's way.  There is something in this.  When the Dutch church issued a papally-approved denunciation of Nazi crimes in 1941, the result was the immediate deportation of hundreds of Jewish-born Catholics to Auschwitz, including the philosopher Edith Stein.  Pius' low-key policy did have some successes.  Vatican intervention in Hungary and (especially) Slovakia disrupted the deportations of Jews to the death camps.  Closer to home, Pius ordered the Italian bishops to open their convents and monasteries to Jews, and he did the same with church properties in Rome.

In all, Burleigh succeeds in refuting the cruder slurs against Pius - one thinks of Richard Dawkins' puerile attempt to get a cheap laugh by calling him 'Pope Nazi' - and he is right to draw a contrast with Grand Mufti Mohammad Amin al-Husseini of Jerusalem, a example of what a genuinely pro-Nazi religious leader looked like.  And yet... there is still something missing.  Even Burleigh has to admit that Pius, an elegantly spoken career diplomat, did not provide the strength of moral leadership that might be expected from the Supreme Pontiff.  Quite how the Catholic Church could and should have handled the war, the Nazis and the Holocaust is not an easy question to answer.  Quite what Pius ought to have said and done remains debatable.  But Burleigh is surely right to suggest that a pontiff in the mould of Pius XI or John Paul II might have met the occasion by saying more in fewer words.

In France, one of the war's most important and lasting effects was to destroy the old monarchist right wing, which was discredited for ever by its association with the collaborationist Vichy régime.  In the religious sphere, conservative Catholics had welcomed the Pétain government (as, initially, had conservative Jews).  Some had claimed that defeat was a good thing: victory would just have prolonged France's slide into decadence, and now maybe something could be done about it.  In fact, the long goodbye of the legitimists was nearly over, and the triumph of the Allies briefly gave birth to a new phenomenon in French history: a Catholic political party that was both pro-republican and supportive of progressive social policies.  The Mouvement Républicain Populaire enjoyed significant success in the late 1940s, before being eclipsed by the more secular and conservative Gaullist movement.

If Christian Democracy failed to take root in France, it became the orthodox centre-right political faith in Germany and (especially) Italy.  In Germany, the CDU was a coalition of Protestants and Catholics, while, as Burleigh memorably puts it, the CSU in Bavaria was what the SNP might have become if Scotland had had a Catholic Counter-Reformation.  In Italy, the Democrazia Cristiana became the Catholic political party, the party that God voted for, though from the mid-1950s it evolved into an opportunistic middle-of-the-road vehicle for winning elections.  Meanwhile, Franco clung on in Spain.  The Vatican unenthusiastically signed a Concordat with him in 1953, but the religious rhetoric of the Franquist regime served to disguise an increasingly dechristianised society, particularly once Vatican II hit and the church lost interest in protecting Europe's last counterrevolutionary Catholic monarchy.

Behind the Iron Curtain, Communist regimes took over in the countries of central and eastern Europe.  The response from the Christian churches ranged from collaboration in officially-sponsored organisations of pro-Communist priests to dogged resistance in the mould of Cardinal Mindszenty.  Burleigh is eloquent and interesting on the barbarities of Communist rule and the realities of life in the workers' paradises.  He rightly notes the role of the churches in overcoming Communism in Europe, paying particular attention to Catholicism in Poland and Protestantism in East Germany.  One gets the impression, however, that he somewhat overstates the importance of religious resistance to Communism, at least outside the rather unusual case of Poland.

As a well-known grumpy old man, Burleigh seems to hit his stride in the chapter on the secularising changes of the 1960s, though at times the rhetoric becomes a little rich or even self-indulgent.  "It is more self-flattering to claim to be a 'spiritual' or 'religious' person," he observes, "than to concede that one's universe is bounded by supermarket aisles, the antics of Posh 'n' Becks or television programmes devoted to Hitler, sharks and the 'reality' of a woman masturbating with a bottle."  Something similar could be said about his chapter on the Troubles in Northern Ireland.  He has great fun with the shenanigans of militant republicanism, but he sometimes seems to fall prey to the Starkey Fallacy that being opinionated in itself makes one interesting.

Burleigh's final chapter deals (of course) with Islamist terrorism, a phenomenon for which Burleigh has an understandable horror.  He is entertaining on the Egyptian jihadi guru Sayyid Qutb, an important influence on the late Osama bin Laden:


Having memorised the Koran by the age of ten, he developed an aversion to Westernised women he had encountered as a student at a secular teacher-training college.  His political involvements... led the Egyptian government to allow him to leave on an extended pedagogical fact-finding trip to the USA in 1949.  An encounter with a drunken women on board ship clouded his vision of that society even before he arrived there.  In a Washington DC hospital the forty-three-year-old virgin, who was ill, was assailed by a lecherous nurse, whose 'thirsty lips... bulging breasts... smooth legs... and provocative laugh' simultaneously attracted and revolted him.  In Greeley... in eastern Colorado, Qutb hated the manicured lawns as symptomatic of Western individualism and materialism....  Worse, in the church halls and crypts he was horrified to discover Christian clergy aiding and abetting youngsters clasped to each other in the darkness of a sock hop as 'Baby It's Cold Outside' played on the gramophone.

It is the most relevant chapter in the book for contemporary affairs, and as elsewhere, the wit and the felicity with words are in evidence, but not everyone will agree with the politics.  Burleigh can probably be forgiven for admiring Niall Ferguson, but he is a little too worried about 'Eurabia' and a little too keen on Melanie Phillips.

Having said this, Burleigh is very far from being a partisan hack.  His political views are predictable, but his text goes considerably beyond right-wing boilerplate.  His book is the work of a distinguished academic historian, and it is wide-ranging and impressively researched.  Few readers will fail to be informed by it.
Posted by Admin at 13:38