What is this blog for?

Review of "Milestones" by Sayyid Qutb

This, if you'll excuse the metaphor, is the Bible of political Islam.  Originally published in 1964 as Ma'alim fi al-Tariq, it is the enduring legacy to the world of Sayyid Qutb (1906-1966), an Egyptian educationalist and a bitter enemy of the Nasser government, western democracy, secularism and female sexuality (not necessarily in that order).  The late Osama bin Laden is said to have been influenced by him and apparently attended lectures given by his brother during his student days in Jeddah. 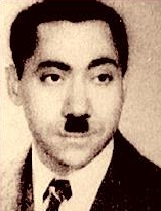 Qutb experimenting with Führer chic
The founding fathers of modern Sunni Islamism were a quartet of men - three Arabs and one Indian - who were born shortly after the turn of the 20th century.  The trail was blazed by Hassan al-Banna (1906-1949), the founder of the Muslim Brotherhood, and Syed Abul A'ala Maududi (1903-1979), who founded Jamaat-e-Islami and lived on to become the grand old man of Pakistani Islamism.  Our friend Qutb can be seen as the leading figure of the second, postwar wave of Islamist pioneers, together with Taqiuddin al-Nabhani (1909-1977), the Palestinian judge who set up Hizb ut-Tahrir.

Qutb joined the Muslim Brotherhood in the 1950s and became a leading activist within it until he was sentenced to death by one of Nasser's special courts in 1966 for plotting against the government.  He continues to serve as a guru for activists across the spectrum of Islamist opinion, ranging from the relatively - relatively - moderate Brotherhood to violent anti-western jihadis.  His own vision was of an "organised and active group" of Islamist pioneers that would separate itself from ungodly modern society.  It has been suggested that this idea of a pure Muslim revolutionary élite is simply an Islamist cover version of Lenin's theory of the vanguard party.

This book has been criticised as dull and repetitive, and indeed it is.  It is not too long, but it is longer than necessary.  It is, however, written in an easy, non-technical manner, and there is a certain calmness about the prose that sits somewhat uneasily with its subject-matter.

Qutb's commitment to Islam was the foundation stone of his political outlook.  It was this commitment that fuelled his desire to change society and the world, so as to achieve "total harmony between human life and the law of the universe", the latter naturally being identified with the word of Allah as revealed in the Qur'an and the hadith.  For Qutb, Islam brooked no competitors:

Jahiliyyah is the name given in Islamic thought to the state of spiritual and moral ignorance that prevailed before the coming of the prophet Muhammad.  Qutb's central idea was that modern society, even in nominally Islamic countries, had declined into decadence from the perfection of the early Muslim community, to the extent that it had fallen back into Jahiliyyah:


Our whole environment, people's beliefs and ideas, habits and art, rules and laws - is Jahiliyyah, even to the extent that what we consider to be Islamic culture, Islamic sources, Islamic philosophy and Islamic thought are also constructs of Jahiliyyah!

Qutb's solution was a revival of authentic Islam, with a view to waging jihad and taking over the leadership of the world.  These ideas of a lost golden age and a coming violent deliverance from decadence are found in numerous religious and political movements, including fascism, communism and Islam itself.

Qutb's vision is profoundly theocentric and theocratic.  Islam prevails over the ties of family and nation.  In the public sphere, nationalism, social reform and moralism are not enough unless they are backed by faith and by Allah.  Qutb accordingly denounced "the Western concept of 'religion', which is merely a name for 'belief' in the heart, having no relation to the practical affairs of life".  Islam, by contrast, was a religion which reached into every corner of life:


The Shari'ah includes the Islamic beliefs and concepts and their implications concerning the attributes of God, the nature of life... the nature of man, and the interrelationships among these. Similarly, it includes political, social and economic affairs and their principles, with the intent that they reflect complete submission to God alone. It also includes legal matters.... It deals with the morals, manners, values and standards of the society, according to which persons, actions and events are measured. It also deals with all aspects of knowledge and principles of art and science. In all these guidance from God is needed....

The totalitarian nature of Qutb's outlook is clear.  His ideal society would arguably look more like the totalitarian states of 20th century Europe than anything that would have been recognisable to Muhammad and the tribesmen of 7th century Arabia.  Comparisons between Islamism and European fascism have long been drawn (and not just by the Bush White House).  More broadly, Qutb and his followers stand squarely in the tradition of the European Counter-Enlightenment, denouncing Western-style liberal democracy in favour of a repressive, authoritarian social and political system drawing its inspiration and legitimacy from a fundamentalist interpretation of religious faith.  Qutb has the cheek to portray this deeply sinister programme as emancipatory in nature - it is, he insists, a means of liberating human beings from servitude to other human beings so that they can live in equality under the rule of God alone.

The true hallmark of fundamentalism is not strength of belief, nor even simple extremism, but rather separatism - the conviction that heretics and infidels are not merely wrong, or even sinful, but that they are stained with a kind of miasma and hence must be shunned.  Qutb eagerly embraced Islamic separatism.  There are only two types of society, he writes, Islamic and jahili.


When a person embraced Islam during the time of the Prophet... he would immediately cut himself off from Jahiliyyah.... He would look upon the deeds during his life of ignorance with mistrust and fear, with a feeling that these were impure and could not be tolerated in Islam!... Thus, there would be a break between the Muslim's present Islam and his past Jahiliyyah, and this after a well thought out decision, as a result of which all his relationships with Jahiliyyah would be cut off and he would be joined completely to Islam, although there would be some give-and-take with the polytheists in commercial activity and daily business....  We must also free ourselves from the clutches of jahili society, jahili concepts, jahili traditions and jahili leadership.  Our mission is not to compromise with the practices of jahili society, nor can we be loyal to it. Jahili society, because of its jahili characteristics, is not worthy to be compromised with.

It might also be noted here that Qutb didn't have much time for Jews ("world Jewry"), whom he regarded as conspiratorial usurers.

This book has been compared to Mein Kampf, but this is misleading.  It is a less bloodthirsty book that one might expect, at least on the surface.  Qutb does indeed call for jihad, but he is surprisingly vague about it.  It is left to the reader to tease out the meaning of rather euphemistic passages like this:


Islam has a right to remove all those obstacles which are in its path so that it may address human reason and intuition with no interference and opposition from political systems....  It has the right to destroy all obstacles in the form of institutions and traditions which limit man's freedom of choice. It does not attack individuals nor does it force them to accept its beliefs; it attacks institutions and traditions to release human beings from their poisonous influences, which distort human nature and which curtail human freedom.

Even when he writes more or less openly about revolution, he sounds like a PR man:


[W]herever an Islamic community exists which is a concrete example of the Divinely-ordained system of life, it has a God-given right to step forward and take control of the political authority so that it may establish the Divine system on earth.

Readers coming to the book in the expectation that it will prove to be a pornographically bloody incitement to terror will be disappointed.  Still, I can't help feeling slightly uneasy that it continues to sell, together with Qutb's other writings, to the patrons of the Islamic bookshops near my home in east London.
Posted by Admin at 11:45